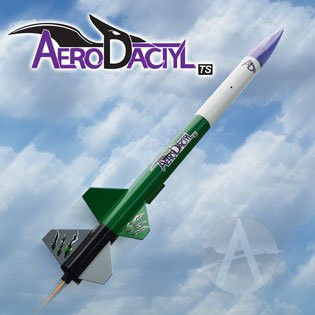 Straight-Forward Construction Because of Laser-Cut Parts 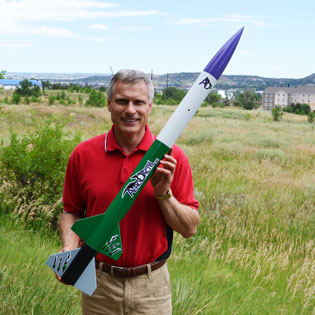 The AeroDactyl TS (the 'T.S.' stands for Two-Stage), is a big and bold rocket designed specifically around the Estes 29mm black powder rocket motors. Those motors (the F15 and E16) are low thrust, so you really need a light-weight rocket to use them. That is what the AeroDactyl TS is, a very lightweight rocket.

Most of our newer mid-power kits have gone over to plywood fins because customers want more durability. But on this rocket, we went old-school and used balsa wood fins to save weight. To increase their strength, we made them through-the-wall.

This is a modern kit, with not only laser-cut fins, but we also laser-cut the slots in the tubes, and vent holes in the centering ring so that this kit becomes much easier to build. We also added pre-cut colorful vinyl decals to the rocket to really enhance the rocket's appearance.

When you fly this prehistoric beast, the rocket lumbers off the launch pad under a huge billowing column of smoke. It is a slow and majestic flight that is sure to please you and the spectators at your next launch.

About the Largest Direct Staging Rocket 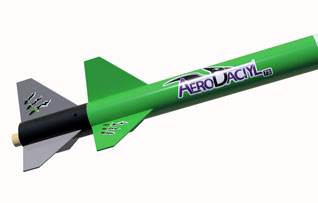 When Estes released the 29mm diameter motors, we knew they would be popular with modelers. First off, there is something awesome about the deep throaty roar of a big motor. Add to this the fact that black powder is easy to ignite with standard motor starters and most people are very familiar with the Estes style rocket motor. Yes... we know they'd be popular.

One thing about black powder motors is that they don't have high thrust like composite propellant motors. So the rockets they launch have to lightweight. Otherwise, they can be unpredictable when launched. The kits we've seen from other manufacturers for the 29mm diameter black powder motors, in our opinion, are too heavy to give an impressive flight.

When we designed the AeroDactyl TS, we specifically did everything possible to keep the weight low. But we wanted to make it as big as possible. The result is a model built around thin-walled tubes and other lightweight components. It is big, and when you fly it, you will be impressed. It takes off fast enough to be safe, but slow enough that it produces a thick and billowy amount of smoke. It is like the rocket is clawing its way into the sky. That is why the decals show claw marks on the fins. This beast is carving a path to incredible heights. In fact, we recommend the Chute Release in the top stage because it goes so high.

The AeroDactyl rocket has the "classic" old-style two-stage configuration. The fins of the bottom stage nest against the back edge of the top stage's fins. Two stage rockets are a blast to launch. As it screeches off the launch pad, the bottom stage suddenly pops off about 200 feet into the air. Then the top stage fires and begins its ascent into the air. This is often called "pop-and-go" staging. Since it has some velocity when the stage ignites, it really picks up a lot of speed. You better be ready for it. And the extra speed allows the rocket to coast significantly higher into the sky than a normal single-stage rocket. Often, the only indication of the rocket you'll have is the smoke trail coming out of the motor. You might want to have a set of binoculars with you when you launch this rocket.

When the booster pops off, it comes tumbling down. That's why this rocket has oversize fins on the booster stage. The larger fins make that part of the rocket tumble down slowly, so it touches down softly and can easily be found on the ground.

This is one rocket that has a lot of versatility. You can fly it either as a single stage or two stage. When flying two stage, use the 29mm diameter black powder motors in both stages. In single stage configuration (just the top section alone), you can use either black powder motors or the higher thrust composite motors. You can even fly it on a G size motor for a very towering flight. You have a lot of choices as to how much fun you want to have on each flight. 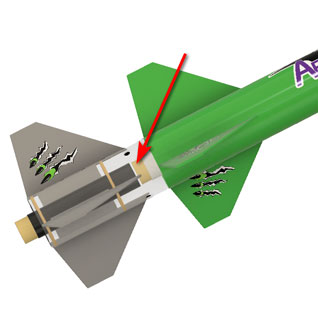 Another thing that makes this rocket unique is that it is technically an example of a "gap stage" rocket. This describes a rocket where the two motors do not physically touch each other like other rockets that use direct staging.

Because the motors do not touch each other, the area between the motors is vented with three holes. These holes allow the cool air inside to be pushed out so that the hot gases from the booster motor's ejection can go directly into the nozzle of the upper (sustainer) stage's motor. This is how the upper stage motor is ignited.

What Makes This a Skill Level 3 Rocket? 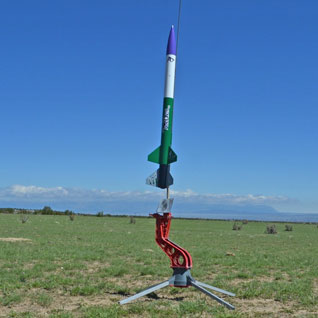 This rocket is rated as a Skill Level 3.  That means it is "average" and isn't too hard to make. You'll find this rocket enjoyable to build if you've ever constructed a large model rocket before.

While not complex, this kit it is intended for a somewhat experienced model rocket builders. It uses the 29mm diameter motors, which have a lot more propellant than other rockets, so having some previous experience with rocketry is a good idea. This is also a two-stage rocket, which requires a bit more knowledge to set up.

The AeroDactyl TS rocket was designed from the start to be as easy-to-assemble as possible. We went through the expense to make it this way because we wanted modelers to get this two-stage rocket into the sky as quickly as possible.

It is easy to build because all the parts are pre-cut and marked, and the instructions are well illustrated. The fins are pre-cut by our laser cutting machine, so they are a perfect fit onto the rocket. The tubes are also laser-cut with slots for the fins. The fins go on straight-and-true every time, so the rocket flies straight up when launched.

The reason it is Skill Level 3 and not a Skill Level 2 is because it is a two-stage rocket and the model uses larger 29mm diameter rocket engines. Because it carries multiple rocket engines, it will fly higher and faster than a simple rocket. Therefore you need to use extra caution when launching it.