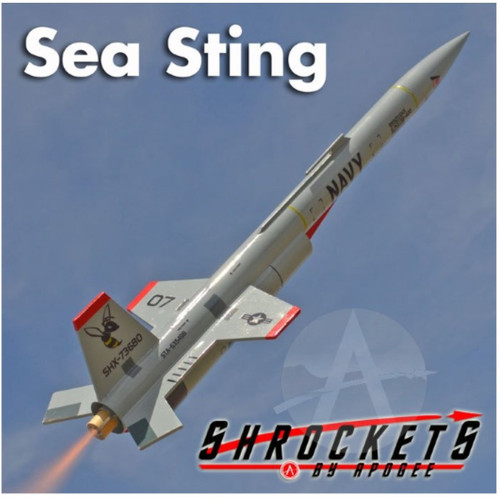 The Sea Sting model rocket is a futuristic missile with a naval theme from the mind of kit designer Shrox. It represents "what might be" in coastline defensive missiles. The kit is based on a 1.325-inch diameter tube, so it has nice size and great performance on low-cost rocket engines.

Made in the USA by Apogee 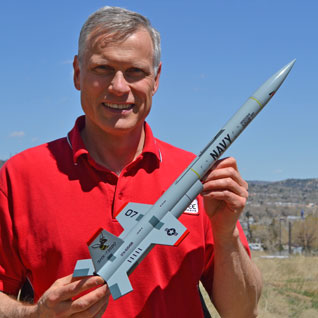 Looking for a unique rocket that is a pleasure to build and fly? The Sea Sting is a futuristic missile that represents what coastline defense might look like. It comes from the mind of Shrox, so it has great styling that gets a lot of attention whenever it is flown. Shrox writes:

"First deployed in 2021, the SeaSting is a guided missile pitted against incoming targets that threaten civilian populations in coastal areas. Launched from autonomous platforms at sea, the SeaSting cruise missiles are designed to deliver a defensive payload over long distances with high precision; that is, small circular error probability. It is capable of traveling at supersonic or high subsonic speeds, is self-navigating, and is able to fly on a non-ballistic, extremely low-altitude trajectory. Preprogrammed with terrain maps or guiding itself with LIDAR and GPS telemetry, it threads its way through the tightest spaces and roughest terrain. It is the world's fastest defensive cruise missile in operation, traveling at speeds of Mach 2.8 to 3.2."

This model rocket features not only laser-cut balsa wood fins but also laser-cut and etched body tubes. This makes assembly more precise, so you'll have a more enjoyable building experience. And the lower jet-intake tube is also already laser cut for you, so you will have this rocket together in very little time. 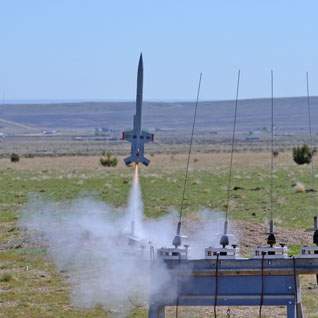 The graphics are what makes this rocket really unique. There is so much eye-candy to look at, at you'll start to believe that this was based on an actual rocket, even though it is pure fantasy. The decals are printed here at Apogee on real vinyl adhesive-backed material. The advantage of vinyl is that it has a little bit of stretch to it, so goes around curves better and tucks neatly into hard corners, like the joint where the fin meets the tube.

The rocket is a joy to fly too. It has a metal engine clip that makes loading rocket engines effortless and quick. Just pack the colorful parachute, and you're ready to launch. 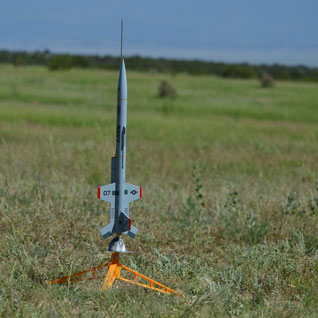 One cool feature of the Sea Sting rocket is the ducted tube on the bottom of the rocket. This acts like a little fin, making the rocket more stable. In the past, this would have been cut as part of the assembly process. Unfortunately, this would have pushed the kit into the skill level 4 category. So we laser-cut the tube for you. Now all you have to do is to attach it to the rocket. You'll really like how easy we tried to make the assembly of this beautiful kit.

What Makes This a Skill Level 2 Kit? 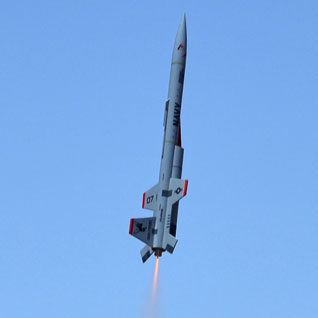 We rank this as a relatively easy kit to build on the Apogee Skill Level ranking system. The Sea Sting is a Skill Level 2 rocket on the Apogee Components complexity scale. That means it is easy to build and can be used with beginner rocketeers, although we suggest that it be used with modelers that are a little older, such as late teenagers. The reason is that the instructions have a high amount of text on the pages, and younger modelers may not read them thoroughly. If the modeler is young, they'll need a lot of adult supervision.

The core of the rocket is relatively simple to put together and you probably won't even think twice about it because it has laser-cut parts and a beautifully slotted tube. The tube is even pre-marked for the location where the decorative strake is glued on.

Probably the most challenging aspect of building the kit is assembling the wing panels. Each of the two sides of the main wing is made from three pieces of balsa wood that have to be assembled together by gluing the edges together. This should be done on a flat surface so that both wings are flat and the tabs fit into the slots on the tube. 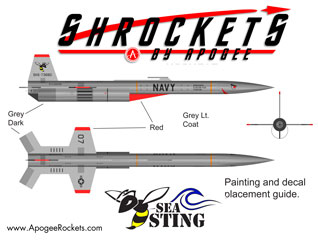 Painting this rocket isn't too bad. It is mostly gray with red on the tips of the fins. You don't have to paint it the way we did, just have fun with the scheme. We've provided a downloadable PDF document showing the paint scheme created by Shrox, as well as the location of the various decals for the rocket. 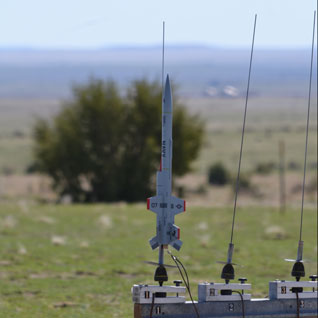 If you want general tips on building rockets, be sure to check out our Advanced Construction Videos. There are well over 200 YouTube videos that cover things like painting, assembly techniques, and flying model rockets.

For the Sea Sting rocket, we highly recommend watching video #228, which shows how to get a flawless surface finish on the balsa wood fins on this rocket. Also watch video #90, which shows how to use soapy water to position self-adhesive decals like the ones on this kit. This is how we put down the decals quickly and easily on the kits shown here.

We know that your friends will be in awe of how you got such a great looking rocket. And when you share your secrets, please mention us. 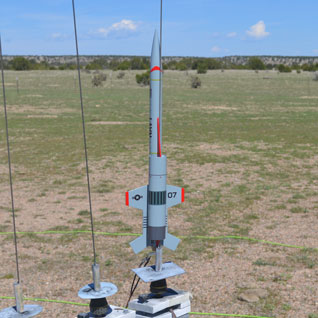 Features of the Sea Sting 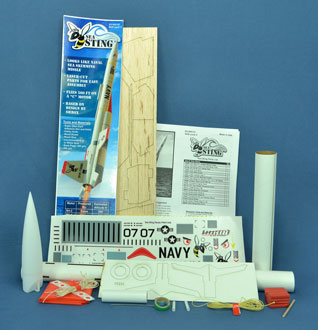 While the manufacturer's name says "Shrockets," the rocket is produced by Apogee Components, using the premium components you'd expect. The Sea Sting is a first class rocket in almost every way. We didn't skimp on the quality of the materials or the effort to customize them for you. 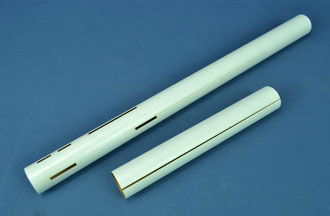 Premium Quality Laser-Cut Body Tubes - The tubes are thin-wall to reduce weight, but are plenty strong for this model. The surface is slick and smooth, which makes marking lines on them easy. Painting is also a breeze since the spirals are tight and require little filling.

They are pre-cut tubes, cut with our laser system so that you don't have to do any cutting during assembly. This greatly decreases the time you will spend building the rocket, making for a more enjoyable assembly process. Additionally, the rocket will be more precise, will look better when completed, and you'll spend less time finishing the rocket since you won't have to try to fix any imperfections that typically occur when you have to make your own slotted tubes. 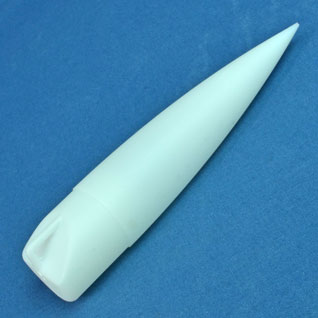 Blow-Molded Plastic Nose Cone - The nose cone of this kit was created specifically for the Shrockets line of kits. It is a true 3-to-1 ratio ogive nose shape. It is blow-molded from hi-impact polystyrene, so it is easy to sand, glue to, and paint. Compare it to blow-molds from other manufacturers, and you'll find it is nicer because the parachute loop on the back end is larger making it easier to attach the parachute. 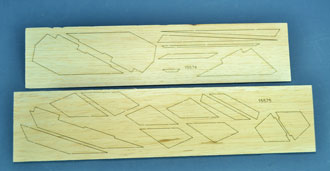 Laser-Cut Balsa Wood Fins - Balsa wood is very lightweight and can be airfoiled by sanding to reduce the drag forces on the kit. This makes the rocket zoom higher and faster into the sky. Having the fins laser-cut means that each fin is pre-cut to size with the precision of a machine. There are no crunched edges. You'll notice as you are assembling the rocket that everything just goes together easily and quickly. You don't have to tweak parts by sanding them too much to make them fit together. This saves you time and effort and makes for a more enjoyable construction phase. They also have tabs on the root edge of the fin to go into the slots on the body tube. This creates a through-the-wall fin mount, which is the strongest method of attaching fins. It also assures that the fins are straight - so your rocket flies nice and steady every time it is launched.

This model comes with a high-strength, Kevlar® Shock Cord. Kevlar is six times stronger than steel, and is also heat resistant. It can easily withstand the high heat of ejection, ensuring the rocket descends as a single piece. This makes for a very durable rocket that can be launched again and again.

Durable 18" Diameter Plastic Parachute - The kit comes with a colorful chute that makes it easy to see your rocket as it comes down from super-high flights. We chose orange because it makes it easy to see the rocket if it drifts a long distance down range. We've lost our fair share of rockets, and we use a bright color to minimize that risk.

At Apogee Components, we use a thicker cotton thread for our suspension lines than any other rocketry manufacturer. The thickness makes it easy for kids to tie knots because it is easier for their fingers to hold. It is little features like this that we think about, as we want your experience to be the best and easiest. 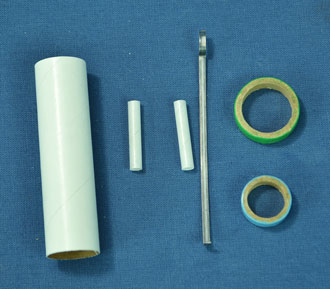 Spring steel engine retainer clip allows you to swap out engines between flights in just milliseconds. It is really that fast!

Standard-Size 1/8 inch Launch Lugs - Works great on a standard launch pad. If you need a pad, we recommend the Sky Launch System. Be sure to add it to your shopping cart when ordering this rocket.

Color-Coded Centering Rings make assembly easy. You don't need to know technical names of the individual parts. You just grab the one that is the right color.

Cardstock Display Stand - Because this is such a beautiful rocket, we know you'll want to show it off. The fins don't allow the rocket to stand upright by themselves, so the display stand holds the rocket up so it is easily visible and takes up less space on your shelf.

Real Vinyl Decals - While printed vinyl decals aren't cheap to produce, you'll love them for how durable and easy they are to apply. The color is eye-popping for starters, and they are pre-cut to make assembly easy. Just peel them off and lay them on your rocket. The high-gloss finish will make your rocket the envy of your friends. 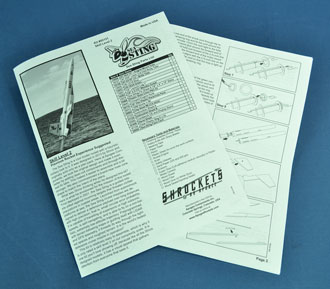 Detailed Instructions - The assembly instructions in this kit are no different from the ones we put in all Apogee kits. They are well illustrated and very detailed. We spent a lot of time creating the instructions so you are assured of a well-built kit that is actually fun to build!