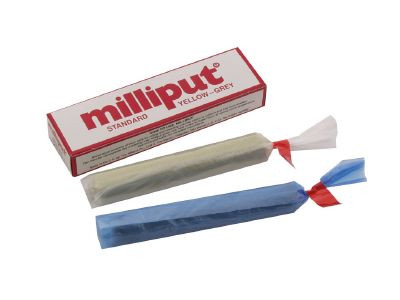 Standard Milliput is our general purpose grade - it has been used for many years for the toughest tasks.

"Milliput Standard has saved The Robert & Mary Ellis II Whitby Lifeboat (now called Highlander) thus helping preserve a wonderful part of Britain’s maritime history. Without Milliput for the repairs, required after several incidents with logs breaching the boat, it would have been far too expensive as it would have required a dry-dock repair. So thank you to Milliput for this fantastic product"

I have been using Milliput for many years, maybe 25. It is an incredibly versatile material and very easy to use as it can be worked with water for modelling or press molding. I recommend it for small detailed work or large pieces. It’s great!

I have just been filling in a couple of knot holes in a strip of wooden architrave.  Whilst working, my mind drifted to when I first became aware of Milliput and how long I had been using it.  In the 60s a workmate gave me some to mend a broken direction indicator stalk on my car.  The repair was still sound when I change the car three years later and I had become a big fan of the product.  The uses I have seen it put to over the years are many.  In 1969 we had a wasp nest behind the fascia below the guttering on our house.  They were gaining access through a small hole.  After they moved on I filled the hole with Milliput – it’s still in place, having been painted over a few times over the year.

I spent almost 50 years in the printing industry, starting in the days when many firms were still setting type by hand.  For large posters, instead of metal, the letters were made of wood to save weight.  Although this was a hard wood it could get dents on the surface over time leading to little white spots appearing on the final printed job.  Once again Milliput was the answer.  Dents were filled and then carefully sanded and the wooden letters were as good as new.

So as you can see, I’ve been a Milliputter for almost 50 years and have lost count of the uses I have put it to. I congratulate you on keeping the business going all this time.

I would like to add my experience of using MILLIPUT for 101 uses on my boat and around the house,  to the many testimonials you already have.

Some years back, I happened to be at the local ironmongery store purchasing some items that I required, and I couldn't remember whether I had Milliput on the boat.  So not wanting to be caught "short" I purchased a pack 'just in case'.

When I got to the boat I found that I had not one but two packs of Milliput. Such is my keenness to be well stocked!  No problem there, I always find use for the product!

A few weeks later whilst sailing on a Sunday morning,  I struck a reef and my boat began to take on copious amounts of seawater.  I jumped over-board to assess the damage and found that the fiberglass was damaged to the size of a tennis ball. However due to the nature of fiberglass although the hull had been seriously compromised, it was not a gaping hole since the fiber strands were still mostly spanning the hole.  But water was gushing in all the same!

I remembered that I had three packs of Milliput. Whilst the bilge pump did it's work, I kneaded my entire stock of Milliput and stuffed it into the hole, pushing the fibers in.  I completed the job by 'fairing' off with the palms of my hand. All this under 1,5 meters of water.

On the following morning, I took the boat to the local yard, hauled her out and asked them to fix the damage.  They found it physically impossible to undo my repair, even using a mallet and chisel. They had no option but to cut into the sound fiberglass around my repair and glass over the now enlarged hole!

With hindsight I should have stuck with my own repair!

The Shipwright could not comprehend how I had effectively saved my boat from surely sinking!

Made in the United Kingdom.