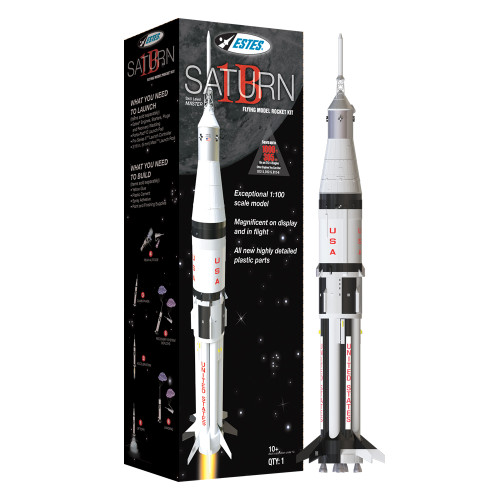 The Estes Saturn 1B is a stunning 1:100 recreation of this rocket of the Apollo era. Designed to test Apollo hardware, it later served as crew launch vehicle for Skylab and the Apollo Soyuz Test Project. Build and launch this Master-Level kit for spectacular lift-offs and dazzling dual parachute recoveries.

One of the distinctive features of the Saturn 1B is the set of cylindrical tanks that forms the rocket’s first stage. Resembling a cluster of smaller rockets, the tanks are sometimes misidentified as re-purposed Redstone missile stages. In fact, these 70-inch diameter tanks were created using the same forms that produced the Redstone rockets. So, while they share a common lineage, they were not surplus rockets themselves. The tanks fueled eight H-1 engines, four of which could gimbal to steer the rocket while under power. Eight low profile fins ringed the base of the rocket for guidance during atmospheric flight.

In February of 1966, the first Saturn 1B was launched with an early version of the Apollo Command and Service Modules – no crew was aboard. The subsequent Saturn 1B launch of Apollo 7 on October 11, 1967 certified the Apollo spacecraft for human spaceflight. It would be the last Saturn 1B launch for nearly five years.

In 1973, after the final Apollo moon landing, the last Saturn V was used to launch the Skylab Orbital Workshop. Three crews would eventually be sent to live and work in the space station, each launched aboard an Apollo Command Module carried by a Saturn 1B. The first of the three Skylab crews lifted-off on Saturn 1B vehicle SA-206 and stayed for 28 days. Their first task in orbit was to repair Skylab after an accident at launch ripped away a solar panel and sun shield. Led by Apollo 12 moon walker Pete Conrad, the crew performed a dangerous EVA and successfully rescued the space station.

The Estes Saturn 1B SA-206 is a stunning 1:100 scale recreation of the Saturn 1B and Apollo spacecraft stack as it appeared in 1973 for the launch of the first Skylab crew. Every detail is there, from the Launch Escape System atop the Apollo Command and Service Module, to the first-stage H-1 engine nozzles (remove for launch). Textured body wraps, injection molded components, and other plastic formed parts add a level of realism to this Master-Level kit that every scale modeler will appreciate. Launch your finished model using one of the recommended Estes engines for a spectacular liftoff and dazzling two-piece recovery under dual parachutes. On display or in the air, the Estes Saturn 1B is a marvelous addition to any fleet.