eRockets export to Canada $29.99 less than 10 Pounds - No other countries yet. 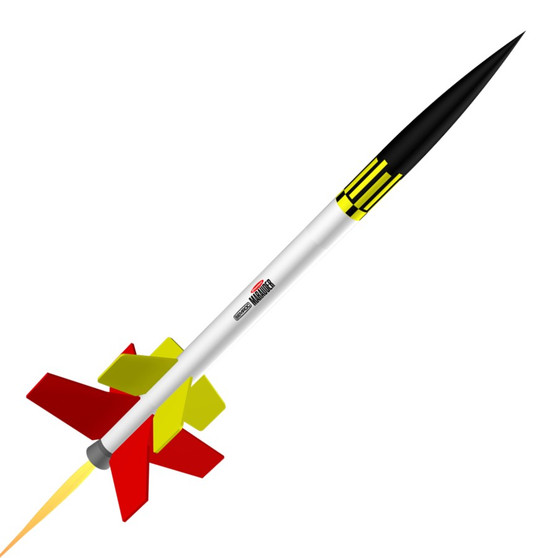 Semroc Flying Model Rocket Kit Marauder™   SEM-KN-06  Limited Edition (only 50 have been made, Includes kit numbers up to 50)

Made in the USA

About Centuri Engineering
Centuri Engineering Company was started in 1961 by Leroy (Lee) Piester in his garage while he was still in college in Phoenix, Arizona. With his wife, Betty, they built Centuri into one of the largest model rocket companies ever.

Centuri was known for its unusual and innovative designs, producing over 140 different kits with something for every model rocketeer. They also produced model rocket engines and pioneered the modern composite high powered engines with their Enerjet line.

Centuri Engineering was sold to Damon in the late 1960’s and shared the same parent corporation with Estes Industries, the largest model rocket company in the world. The Centuri product line was kept separate from the Estes line until 1983. A few of the old kits have been reissued by Estes since then, but for the most part, Centuri Engineering Company lives today only in the dreams of the senior members of the model rocket community

Semroc produced a full line of model rocket kits and motors. At its peak, Semroc had twenty-five full time employees working at two facilities. One was for research and development, printing, shipping, and administration. The other was outside of town and handled all production and model rocket motor

manufacturing. For several years, Semroc successfully sold model rocket kits, supplies, and motors by mail-order and in hobby shops. In early 1971, Semroc became insolvent and had to close its doors.

After 31 years of dreams and preparations, Semroc Astronautics Corporation was reincorporated on April 2, 2002 with a strong commitment to putting the fun back into model rocketry. Many years of excellent service to the rocketry community passed by until sadly, on August 11 2013, Carl passed away and left a great void in the hearts of many rocketeers. He is forever in our hearts and minds.

In February of 2015, Semroc was sold to eRockets and moved to Dayton, Ohio where it resides today. It is our goal to continue the level of service and dedication to the hobby Carl and his family were so well known for. We strive to serve you, our customers, to the best of our abilities as we carry the vision of Carl McLawhorn boldly into the future.

About the Centuri Marauder™

The original Centuri Marauder was released in the 1969 Centuri catalog. It was advertised as an ideal beginner multi-stage rocket using Centuri’s “dual-lock” stage coupling, later known as the Pass-Port Staging System. It only had a three year production run, but is still remembered by many as their first two-stage rocket. It was released as #KC-45 and retailed for $2.75.

The Semroc Retro-Repro™ Centuri Marauder™ is very close to the original. The pre-printed fins are replaced with more convenient laser-cut fins. The original balsa nose cone is supplied instead of the later plastic nose cone. The original rubber shock cord is replaced with an elastic cord for longer life along with a Kevlar® cord for greater reliability and ease of mounting.

If you are just starting in the hobby start at the beginner level and move up from there at your own pace.

All model rockets come in kit form that require assembly.  The materials are primarily cardboard tubes, balsa or plastic fins and nose cone. Materials will vary by model and are typically specified in the description of each kit.

Warranty for 1 year from manufacturer defects

Sorry, Out of Stock

Sorry, Out of Stock