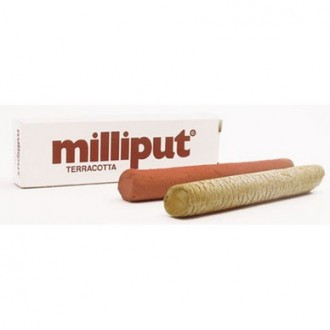 Milliput is a versatile manipulative two part epoxy putty which when mixed together sets rock hard. When first mixed, the putty is pliable and easily shaped. By wetting the Milliput with a finely woven moist cloth a very smooth finish can be easily obtained.

Terracotta Milliput has been featured in the gardening sections of national newspapers and leading gardening magazines.

"I have been using Milliput since 1981. I used it for every sculpting I did for Trophy Miniatures. It holds up all the shelves and curtain rails in the house in lieu of rawl plugs. I repaired my mothers leaking hot water tank with it, restored a battered, antique samovar and I used it to make a bonnet release catch for my Renault Scenic. This week I have used it to make a mould to cast turrets for a batch of 25 model tanks I am scratch building. There are never less than 2 packs around the house at any time. It's a wonderfully versatile product."
Huw Williams, Ebbw Vale

"Milliput is not just for modelmakers and ceramic restoration, albeit perfect for such repairs, I have used it personally and professionally in several severe extreme environments over the last 30 years, for work such as underwater in the North Sea, harbour floating, pontoon repair and also bridge repair work, submarine (nuclear type sub)repair to the nose cones, car repair and water tank repair. The latter was used like a hot rivet, but without the hot steel and hammers, clean/roughen the area to be repaired and then just roll and flatten and blend the Milliput until it is streak free, push it through the hole, press it inside and outside to form a dome both sides and Voilà, you have a cold, water tight rivet. The use of water on the fingers or the tools you are using will help smooth it out. Once hardened it can be cut, drilled, tapped, filed and shaped to any form you want. If you can imagine it then Millput can do it. It will harden underwater and make airtight repairs. This is one of the most versatile repair/fix it material available, and best of all it’s made in Wales, Cymru."
Stephen Beesley, Barmouth