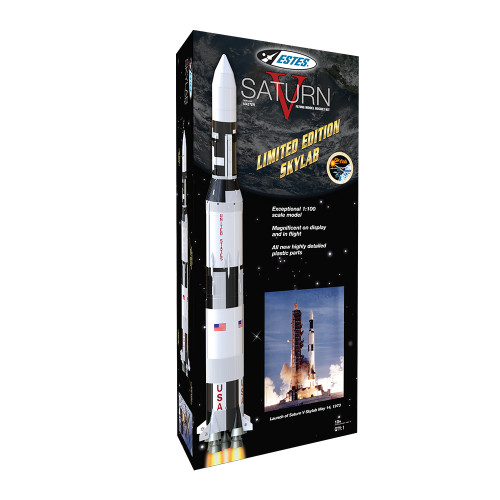 In 1973, the last Saturn V was launched with a special payload – Skylab, America’s first space station. Now you can build and fly your own 1/100 scale replica of that historic mission. Exciting launches up to 350 feet on an Estes F15-4 engine, and spectacular three-parachute recoveries.

Between 1967 and 1973, NASA successfully launched 13 Saturn V rockets – two were unmanned test flights, nine carried astronauts to the moon or Earth orbit, and one, the last Saturn V, had a mission unlike any other. This was the launch of the first American space station, an enormous orbital habitat called Skylab.

Apollo was not meant to be a singular achievement. After a series of moon landings, NASA expected to transition to the Apollo Applications Program (AAP) which would have used the hardware developed for the moon missions to support expanded space exploration activities. AAP would have deployed Lunar Module cargo carriers and astronaut “taxis,” lunar surface habitats, and orbital space stations. But NASA’s funding was diminishing and by the time of Armstrong’s “Giant Leap” the public and Congress had lost the drive to keep space exploration a priority. Apollos 18, 19 and 20 were canceled even though much of the hardware had already been paid for and built.

In an attempt to salvage some part of AAP and utilize the hardware on hand, a single Earth orbital space station – Skylab – was proposed. The space station was constructed from a modified S-IVB stage and on May 14, 1973, was lifted to orbit by the Saturn V’s powerful first and second stages. Compared to the Apollo Command Module, the interior volume of the Skylab orbital workshop was vast, with room for a crew of three to live and work in relative comfort. Eventually, three separate crews called Skylab home for successively longer missions, culminating in an 84 day stay between November 1973 and February 1974. Although there were plans to keep Skylab aloft indefinitely for future crews, unexpected orbital decay brought the massive space station down in 1979, scattering its parts across Western Australia.

The Estes Saturn V Skylab is an accurate 1:100 scale reproduction of this historic rocket and its space station payload. Vacuum formed tube wraps and fin fairings add a textured realism to this model’s surface. Injection molded fins are both durable and detailed – a fin alignment guide is included for precise placement. The detailed water-slide decals accurately represent the markings of this historic mission. Before flight, remove the realistic engine nozzle assembly and prep for launch. The Estes Saturn V Skylab can reach up to 400 feet on an Estes F15-4 engine. At ejection, the rocket separates into two sections for recovery – the Saturn V first and second stages return together under dual 24-inch parachutes, while the Skylab upper section sports its own 18-inch canopy. With impressive E-engine launches and multi-segment, multi-parachute recoveries, the Estes Saturn V Skylab will stand out in any model rocket fleet!

All model rockets come in kit form that require assembly.  The materials are primarily cardboard tubes, balsa or plastic fins and nose cone.  Materials will vary by model and are typically specified in the description of each kit.