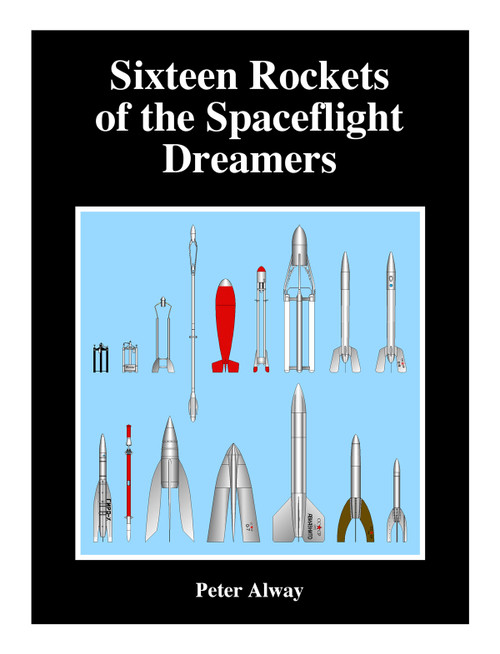 Book The Sixteen Rockets of the Spaceflight Dreamers by Peter Alway

In the 1930’s. an idea spread through Europe and Americal.  Theorests like Konstantin Tsiolkovsky in Russia, Hermann Oberth is Romania, and Robert Goddard in the United States had each independently proven that space travel was possible.  Experimenters—crazy dreamers and engineering geniuses (sometimes both in the same person) in Germany, The USSR, and America began building liquid-propelled rockets ad a first step in the conquest of space.  Sixteen Rockets of the Spaceflight Dreamers covers rockets by Johannes Winkler and the Verein Fur Raumschiffahrt in Germany, GIRD, RNII, and KB-7 in the Soviet Union, and the American Rocket Society in the US (Goddard’s rockets are covered in a separate booklet).

Some of these drawings are based on scans of original GIRD blueprints, others are reconstructed from a mix of partial dimensions, diagrams, and photographs.  Some of the rockets are primitive “blumber’s nightmare” designs, while others, most notably the Soviet designs, are sleek shapes, looking more like futuristic spaceships.  All of these rockets flew, whether they exploded shortly after liftoff or reached miles into the air.  And all of them had a place in the story of spaceflight..  Designers of these machines went on to build the V-2, Sputnik, and even the descent engines of the Surveyor moon lander.