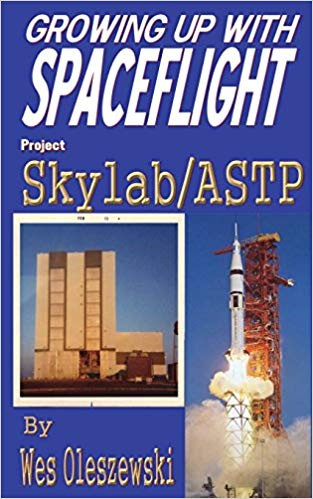 Book Growing up with Spaceflight, Project Skylab/ASTP, by Wes Oleszewski

“Growing Up With Spaceflight- Project Apollo Part One” contains the true story of what it was like for an average kid to literally grow up with the American space program. The premise being that some people were close to the space program, hands-on, working daily with the hardware and the technology that made history… the rest of us had to watch it on TV. This book is the third release in a six volume series and follows the author from 1973 and his very first visit to “The Cape” through to the final flight of an Apollo spacecraft in the Apollo-Soyuz Test Project in the summer of 1975. Along the way readers who also grew up in that era will read the accounts and say, “Hey! That was me too! I did that with the Apollo models, I watched that on TV, I remember that day.” Additionally, readers who were not yet born will be able to get an up-close and personal look though the keyhole of the door of time and experience what it was really like to grow up in that exciting era. Author Wes Oleszewski is known for his detailed historical narratives published in his 17 previous books that look at shipwrecks, now he turns that focus onto the golden era of America’s space program. Those readers who seek technical details about NASA’s manned space vehicles and rockets will not be disappointed. The author has, as always, dug deeper than previous writers into NASA’s documentation and pulled out fascinating and highly obscure details of the events. Working with two editors who are, in their own right, experts in the history of spaceflight, the author managed to surprise even them with a few previously over-looked facts. Yet, although technically correct and fact-filled, the “Growing Up With Spaceflight” series is not a dry engineering account. Rather it is fun and witty read that will take the reader on a pleasure trip to a time gone-by. The author has gone to great lengths to add illustrations that are both informative and unique. As in all of his works, Wes Oleszewski has produced a book that is free of gratuitous sex and violence and he remains clear of the personal lives of the people who made the space program happen. This is a book of pleasure reading that avoids tabloid tidbits. Readers will enjoy this book and they will learn a thing or two as they do. By the time that they finish, they will be looking for the next book in the series. All six volumes of the “Growing Up With Spaceflight” series are completed and will be by early 2016.

Book Growing up with Spaceflight  by Wes Oleszewski