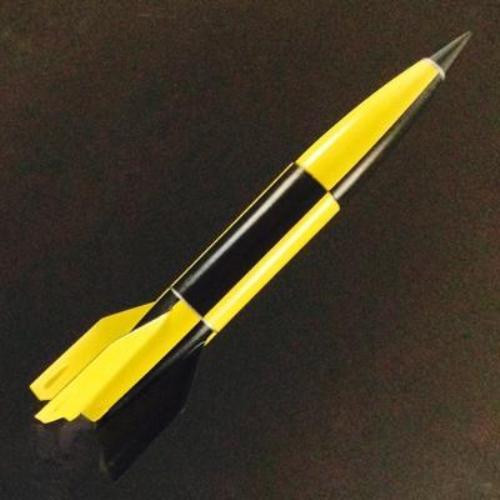 The V - 2 ("Vengeance Weapon 2") is perhaps the most famous, and certainly the most infamous, rocket ever built. Designed by Werner von Braun for the Nazi war effort during WWII, the V - 2 was the world's first large liquid-fueled rocket. Originally designated the A - 4, thousands were built by prisoners during the early 1940s. After the war, many captured V - 2s were flown by the U.S. as well as the Soviet Union. Despite its' horrific inception as a weapon of destruction, the V - 2 was the forerunner of all the large liquid-fuel rockets which were to follow. Our most popular kit! Like our other V - 2 kits, this model has a pre-drilled balsa boattail & balsa nose cone, laser-cut basswood fins and is accurately scaled. Designed primarily to fly on D12 motors, it will fly "outta - sight" on a composite E! Also flies great on 18mm Bs and Cs with adapter EA18/24 (not included). This kit has been recently updated to include an optional quick-change engine hook. Instruction sheets have been updated and re-written as well.